That Was Then, This Is Now

The Outsiders is a coming-of-age novel and the first book written by S.E. Hinton, published in 1967. Hinton was only 17 years old when she started writing the book, and had it published when she was 18. In 1983, a film adaptation of the novel was released, directed by Francis Ford Coppola.

Ponyboy, a young member of a small gang of Greasers, is leaving a movie theater when a group of Socs jumps him. His gang, including his older brothers Darry (who is the de facto leader of the gang) and Sodapop, saves him. The next night, Ponyboy and his friends Dally and Johnny meet Cherry Valance and Marcia at a drive-in movie theatre. Ponyboy realizes that Cherry is nothing like the Socs he has met before. The Greasers walk Cherry and Marcia home, and Socs Bob Sheldon and Randy Adderson see them and think the boys are trying to pick up their girlfriends. Cherry and Marcia prevent a fight by leaving with Bob and Randy willingly. When Ponyboy comes home very late, Darry gets angry and hits him. Ponyboy runs away and meets up with Johnny. As they wander around the neighborhood, Bob, Randy, and three other drunk Socs confront them. After the Socs nearly drowns Ponyboy in a fountain, a terrified Johnny stabs Bob, accidentally killing him, causing the other Socs to flee. Ponyboy and Johnny find Dally, who gives them money and a loaded gun and tells them to hide in an abandoned church. They stay there for a few days, during which time Ponyboy reads Gone with the Wind to Johnny and recites the poem "Nothing Gold Can Stay" by Robert Frost.

When Dally comes to get them, he reveals that the fights between the rival groups have exploded in intensity since Bob's death. Johnny decides to turn himself in (against Dally's advice), but the boys then notice that the church has caught on fire and several children are trapped inside. When Johnny and Ponyboy rush to rescue them, burning timber from the church's roof falls on Johnny, breaking his back. Dally rescues Johnny. Ponyboy is relatively unscathed and spends a short time in the hospital. When his brothers arrive to see him, Darry breaks down and cries. Ponyboy then realizes that Darry cares about him, and is only hard on Ponyboy because he wants him to have a good future.

Two-Bit informs Ponyboy that he and Johnny have been declared heroes for rescuing the kids, but Johnny will be charged with manslaughter for Bob's death. He also says that the Greasers and Socs have agreed to settle their conflict with a major rumble in a vacant lot. The Greasers heroically win the fight, and after the rumble, Dally and Ponyboy visit Johnny and see him die, his last words being "Stay gold, Ponyboy... stay gold...". Dally, overcome with grief, rushes out of the hospital and robs a store. When he points his empty gun at the police, they shoot and kill him just as the gang gets to the scene. Ponyboy faints and stays sick and delirious for nearly a week. While recovering, he tries to convince himself that Johnny is not dead and that he is the one who killed Bob.

When Ponyboy goes back to school, his grades drop. Although he is failing English, his teacher says he will pass him if he writes a decent theme. In the copy of Gone with the Wind that Johnny gave him before dying, Ponyboy finds a note from Johnny describing how he will die proudly after saving the kids from the fire. Johnny also urges Ponyboy to "stay gold". Ponyboy decides to write his English assignment about the recent events, and begins with the first line of the novel: "When I stepped out into the bright sunlight from the darkness of the movie house, I had only two things on my mind: Paul Newman and a ride home...". 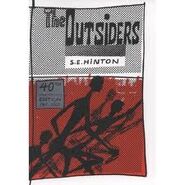