Sean Kanan is an American actor. He became known for portraying A.J. Quartermaine in the General Hospital TV series from 1993 to 1997. In The Outsiders TV series, Sean Kanan was a recurring cast member and portrayed Gregg Parker.

Sean Kanan was born as Sean Perelman on November 2, 1966 in Cleveland, Ohio. His parents are Dale and Michele Perelman. The family later moved to New Castle, Pennsylvania.

Sean attended Mercersburg Academy in Pennsylvania, Boston University and the University of California, Los Angeles, where he earned a degree in political science.

In July 2012, Sean Kanan married Michele Vega. Both had children from prior relationships, he has a daughter, and she a son and three daughters.

His first major film appearance was in was his role as Mike Barnes in the 1989 movie The Karate Kid, Part III. Already as a teenager, he had been trained in boxing. At age 13, he had changed to to Shotokan Karate and kickboxing. While filming the movie, he also was trained in Shitō-ryū. He was then cast for the role of the recurring character Gregg Parker in The Outsiders TV series (1990).

In 1993, Kanan joined the cast of the General Hospital TV series where he portrayed portraying A.J. Quartermaine. He left the show in 1997.

Sean Kanan never won an award, but was four nominated for the following awards: 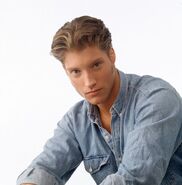