The Curtis gang is a gang of greasers to which the Curtis brothers and other close friends belong. They are a very close-knit bunch, considering each other family. They could be considered more of friends then an actual gang, considering only 1 of their members regularly commits crimes.

There are 7 main members at the start of the story:

Johnny and Dallas die during the course of the story, meaning there are now only 5 members.

When two members of the gang, Dallas Winston (second) and Johnny Cade (first), die on the same day, everyone is devastated.

Johnny Cade was considered the gang's "pet", because he is scared and quiet in most situations. Sodapop is the one that everyone in the gang can look up to because he is happy-go-lucky and easy to talk to. Two-Bit is the "joker" of the group because he is often times making wise cracks and goofing off. Darrel is considered the unofficial leader because he always thinks straight. Ponyboy is the quiet one who is the "kid" of the group and is more into movies and non-violence than the other members. Dallas was the toughest greaser in the gang, since he was first jailed at , was always in and out of prison, is hauled in whenever a crime is commited in the area, and has a long police record. 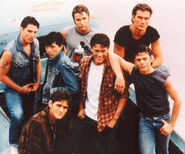